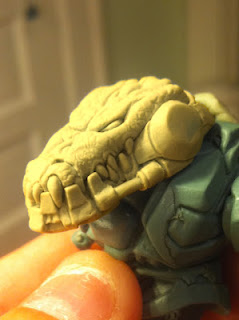 You've seen the Armorvor, but did you know there are several existing and upcoming heads produced by the very men who created the Venjorun Armorvor!  Let's look at the newest one before looking at all the amazing work being done out there.

This version is the Cyber-Alligator Head, currently a hand-sculpted noggin by Jason Frailey Studio! The figure was listed as having a Masters of the Universe Trap Jaw-inspired head with opening jaws (and you can see the pictures!) as well as a great sculpt.  There are no plans for a "mass" release, but he says that The Godbeast will be casting it soon... meaning you'll have a way to get one.  Keep watching this space for info on how to sign up to get one to plug in your Glyos figure bodies, which are as always available from Onell Design and the awesome cast Armorvor bodies from The Godbeast on his site.  (If you're cheap like me, Onell Design has confirmed more Armorvors will  be available in the next drop.)

Jason sculpted the Armorvor figure, which sold out last weekend.  More are coming.  The Armorvor was designed by Matt Doughty (Onell Design), prototyped by The Godbeast, and lovingly illustrated by Nathan Newell (Dork Dimension.)

We'll be looking at the other heads here soon, but if you can't wait-- and you shouldn't wait-- go check out The Godbeast's site right now for more on what he does, and check out Jason Frailey Studio for his amazing work and bat head!
Posted by Adam16bit at 5:13 PM