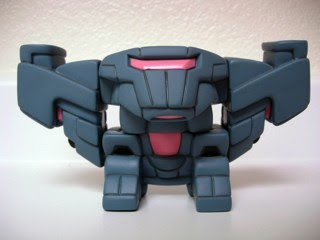 See this? You can't have one. I know that's obnoxious but the huge popularity of the Heavy Armored Rig Relgost Wing Divison caused it to sell out in about an hour and change. The exact run is unknown, presumed to be in the hundreds, and went so fast that apparently there weren't even enough for eBay-- at press time, none have appeared on the auction site. Previous versions of the Rig were made in new colors and rereleased, so while it's likely a Wing Rig could be in your future, this Wing Rig will not be one of them. It's so oddly neat-- the design and coloring feel like something out of a late-1980s Japanese toy and hobby magazine, the kind of thing you just can't find in a store these days.
[ READ THE FULL REVIEW ]
Posted by Adam16bit at 3:36 PM No comments: 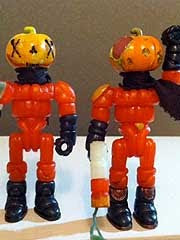 Our pals from 1Shot Toys have turned us on to Glyoween, a new set of low-run figures he's doing for Halloween! Each figure has a unique pumpkin head plus a specially decorated red Glyan body. Each figure is $20 plus $5 shipping, and more details will follow. I assume they will be sold here when the time comes, but stay tuned!
Posted by Adam16bit at 6:05 PM No comments: 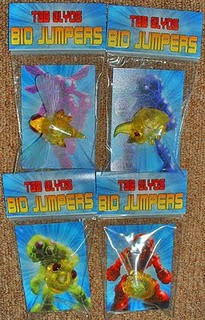 A massive post at THEGODBEAST Customs showcases pretty much every packaged Finkerbot and Bio Jumper there is! The former has a charming robotic illustration, while the latter is vibrant, colorful, and equally awesome for different reasons. 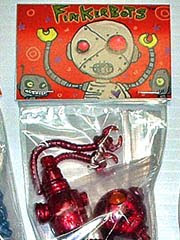 As always, this is worth checking out! More updates are likely on deck, so keep a-checkin'.
Posted by Adam16bit at 6:17 PM 1 comment: 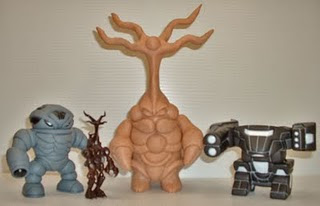 THEGODBEAST Customs have revealed Kabuto Mushi DX, a larger beetle figure seemingly more in scale with Rigs and Armodocs. No word yet on when, if, or how it will be released but it certainly looks spectacular! 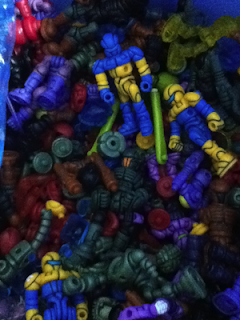 The Onell Design crew has made a trip to China, and they're posting pictures of food, new toys, and other fun stuff. Even fish. It's well worth checking out, particularly exciting are what I assume to be blue and yellow Glyans! Check it all out!
Posted by Adam16bit at 6:09 PM No comments: 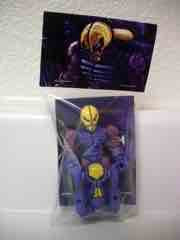 One of the many nice things about ordering figures is that every once in a while, you get more than you pay for. The Callgrim Norisar Ambush is a fine example, as you get a figure, two guns, and a pair of spare heads in addition to who knows what kind of surprise goodies or art cards from the manufacturer. Making good use-- or re-use-- or re-re-reuse of the Callgrim body, this unique figure has a yellow head with pink and purple body parts. [ READ MORE ]
Posted by Adam16bit at 1:24 AM No comments: 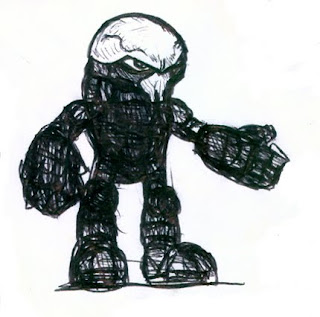 The always-fun Battlegrip.com posted some of the early Onell Design concepts for Pheyden this week, which predate the release of the actual toy. Otherwise, it wouldn't be concept art.

Other figures, including a large alien figure (which remind me of this guy) and other funky little dudes were shown, but here's something I found extremely interesting. And for all I know, this is what was being discussed a few weeks ago.

While labeled "Old Concepts," it ties in to some recent comments from the Onell camp indicating a new product would be of great interest to fans of the 1980s Transformers line... and dang if those guys don't look at least a little like Floro Dery's old boxy robot designs. 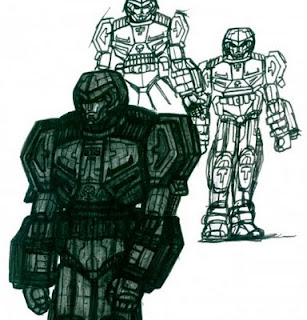 I would assume these are just fun old designs they're showing off for some reason but, well, I know I love to drop hints. It wouldn't stun me if these may be a sign of things to come.
Posted by Adam16bit at 9:06 PM No comments: 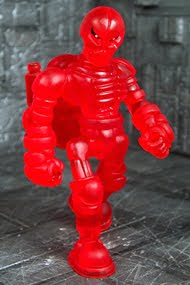 Also, the Standard Grim Squad Armodoc-- a great figure, I've got one here-- has since sold out. This makes the Grim Squad Reverse Armodoc, which is still available, the only Armodoc being sold in the USA right now as far as I can tell. It's $25, same as a Rig, and it's a nice piece.
Posted by Adam16bit at 9:42 PM No comments:

Assuming you made it in time, the deliveries of the August 2011 drop of Onell Design toys are starting to show up as of today. Email confirmations with tracking numbers were sent out, and as always bonus items were included. A lot of people received a Gold Govorum head, and random Bean Bots. (The Bean Bot is an earlier version of what is currently being sold as the Phaseon, with different fists and a few other alternate parts.) I got a bagged blue Bean Bot, but I saw carded ones, pink ones, and others show up.

If you missed the drop, there's not much left. Axis joints are still available, but 6 of the 7 Glyans are low stock or sold out, Xodiac and the Rig sold out immediately, and the gold Argen MK IV is almost gone. So I wouldn't dawdle, "low stock" seems to mean "you got about a week or two."

Did you get anything surprisingly good, or enough parts to make an awesome new build? Let us know!
Posted by Adam16bit at 9:17 PM No comments:

Plays With Others: Imaginext Space Station with Glyos Gallery 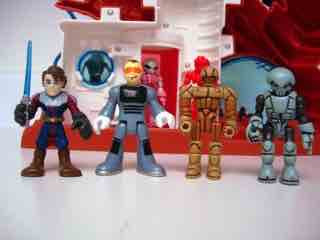 Since there are no Glyos playsets, I bought a Fisher-Price Imaginext Space Station Toy Set on sale a few weeks ago to see if it indeed would do the trick. While not perfect, it's a close fit and certainly shows how the line may be close enough to work with your Onell Design action figures.

Email ThisBlogThis!Share to TwitterShare to FacebookShare to Pinterest
Labels: Plays With Others 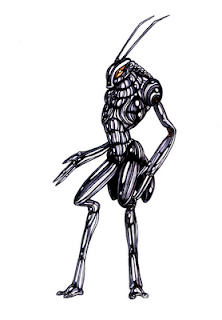 I assume you've seen the posts here, but Onell Design chimed in with more on the Bio Jumper figures, showing original concept drawings and a story behind their names. They "jump" (hijack) the biology of other characters. Neat! Also creepy.

The designs look really great, and for the time being these are going to be low-run pieces. (Or possibly forever, I don't know.)
Posted by Adam16bit at 11:29 PM No comments: