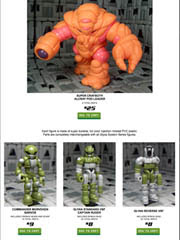 Volkriun Space Force! The final drop of the year is here, and a few guys already sold through.  Panel lines debut on the Swing Joints for the first time, plus get get a good smattering of everything else. Click here to see the November 30 2014 Onell Design drop menu.

Rise of the Beasts Army Packs with Mail-In Figure Bundles 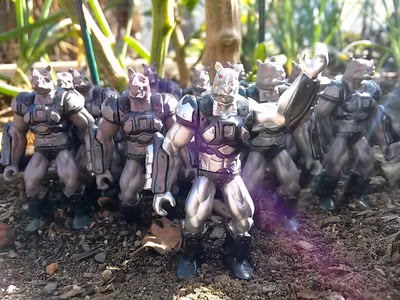 The Rise of the Beasts line added a series of bundles today for your troop building needs.  The mail-in figures are bundled with a group of the standard figures, so if you want to pick which ones you get you can snag them - the catch is that you have to buy 10 of a figure, but for customizing this might not be a bad move.  Click here for more details and click here to order yours.
Posted by Adam16bit at 11:01 AM No comments:

Email ThisBlogThis!Share to TwitterShare to FacebookShare to Pinterest
Labels: Plastic Imagination, Rise of the Beasts 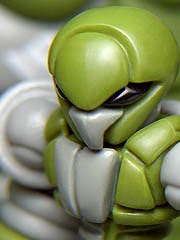 Just in time for Cyber Monday! The new Armorvor isn't yet ready, but a whole new selection of Volkriun Space Force figures will be up for grabs at 9:30 PM Eastern on Sunday.  This is the last batch for 2014, so grab your stocking stuffers here.

Click here for the update at Onell Design's blog.

Also, a few hours after I made this post the full Mission Details were posted. Be sure to check those out too!  Rigs, Super Crayboth, and quite possibly the coolest Phanost ever are up for grabs - and there have been plenty of pretty cool Phanost figures thus far.  More after the break, but you should probably read it over there. 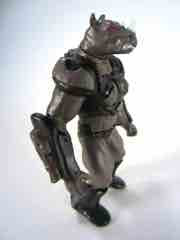 I'm a sucker for small, simple toys - especially when they're cheap or weird quasi-artisanal things. Bal Kharn - Metallic Black Rhino with Grey Paint is the first mass-produced painted version of this mold to go on sale, and it's pretty nice - much like the scorpion, the paint applications are pretty amazing, even for the Glyos factory. It's a small, 60mm-scale toy but it's worth noting that these tiny eyes and the nose horn are tough to paint well. The Glyos factory seems to have paint masks down to a science, while other miniature toys (even the original Battle Beasts could get pretty sloppy here and there. Perhaps it's the smaller runs, or a stricter attention to quality control where the savings are passed along to you.
[ READ THE FULL REVIEW ] 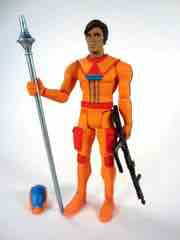 I think I mentioned before when Power Lords was first told to me as under consideration for a revival, I wasn't quite sure I remembered what it was. Adam Power and his friends were not in my childhood toybox, and I checked with some old friends who had some - but had no idea who or what they were. I was a huge fan of the Outer Space Men as a concept - and the revival - plus Glyos and the Four Horsemen usually bring great things. And this is a pretty great thing - but the level of momentum and the value of the club memebership left me wanting. These are all very good figures, and I think that fans collecting them in the future (that is, picking them up on eBay or in trades) are in for a big treat. But for those of us in the present? The level of non-communication, the lack of any idea when the third new sculpted body for this line will happen, and the relatively weak roll-out over the last year makes me think that I need to rescind my all-in attitude and cut back to just the full-painted updates of vintage guys.
[ READ THE FULL REVIEW ]

On Sale Now: Rise of the Beasts Wave 1 The Little Rubber Guys Store has gone live with the first batch of Rise of the Beasts.   3 mono color versions and 1 painted version can be bought right now.  The gold and silver painted figures are mail-in premiums, send in 10 stickers and you'll get a random one for free.  (They are stunning.)
Posted by Adam16bit at 10:16 PM No comments:

Email ThisBlogThis!Share to TwitterShare to FacebookShare to Pinterest
Labels: Drops, Plastic Imagination, Rise of the Beasts 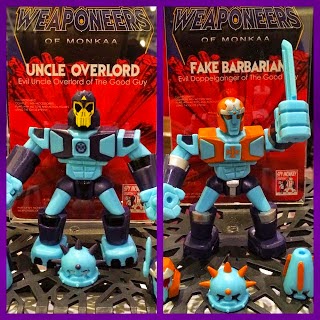 The Spy Monkey Creations Weaponeers of Monkaa Uncle Overlord and Fake Barbarian are going up for sale at the Spy Monkey Store on Friday at Noon Pacific.  Each is $20 and looks pretty fantastic.  Click here for more info.
Posted by Adam16bit at 8:54 PM No comments: 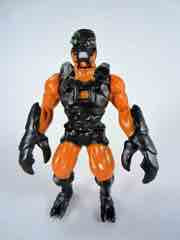 One of the advantages of covering small lines is that the people behind them, at times, are super cool and will sell figures to the press early. The Cahriv - Metallic Black Scorpion with Orange Paint is the only painted Scorpion on sale to the general public, but there are a grand total of five of this guy so far. There's a gold promo figure (reviewed here) in addition to an unpainted flesh figure, an unpainted black metallic figure, plus two more mail-away figures - a silver figure with painted bits, and a black figure with painted bits. They're pretty stunning.

This figure goes on sale on November 15.


I've been sitting on this one for a while - I wasn't sure when the line was hitting, and I wanted to wait until we knew it was or wasn't coming - good news is, they're coming this month! This was written nearly a year ago when the future was looking a little murky. As such, please keep that in mind when you read it, that you're getting my first impressions of prototypes from December, 2013! 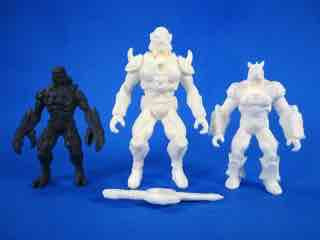 As of when I write this (Christmas Eve, 2013) I do not know when this will be posted or if this will be posted. The gent behind Rise of the Beasts, a line of minifigures which was on Kickstarter, ended and was canceled, and has been through numerous hurdles. Well, that's sort of generous - basically we've heard of numerous factory change-ups, bad sculptors, and other things causing these figures to just plain not come out. As such I was more than a little surprised to have seen a box of these figures on my doorstep, each representing different stages of development. There's a tall lion, roughly 3-inches tall with a weapon and no articulation. The other figures are shorter, at about 2 1/2-inches high - just a smidgen shorter than a Beast Saga figure and taller than your vintage Battle Beasts. The rhino has no accessories and no articulation, while the dark grey scorpion arrived in pieces - the arms, tail, neck, and legs were all separate pieces.
[ READ THE FULL REVIEW ]
Posted by Adam16bit at 12:31 AM No comments: 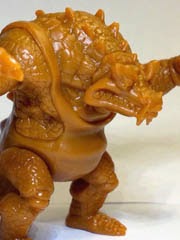 The cult of Glyos expands! A new figure is hitting D-Con this weekend in Pasadena.  The Mystical Warriors of the Ring have been around for a while as nifty wrestling figures in the spirit of 1980s lines, and it's a nifty Glyos-compatible figure.   Meet Goliath!

The brown plastic test shot is limited to 40 pieces and matches the Rig Crew figures from Onell Design a couple of months back.  As a special low run debut, it will be $30.

As you can see on their blog post, the figure mixes and matches with an Armorvor quite nicely and looks to be similar in size.  I like it.

Mark Vasquez has confirmed the 2 1/3-inch figure will be getting a normal release around December in an undisclosed color.  It is slated to be a mere $6, so if you feel like holding out that's quite the deal.
Posted by Adam16bit at 9:27 PM No comments: 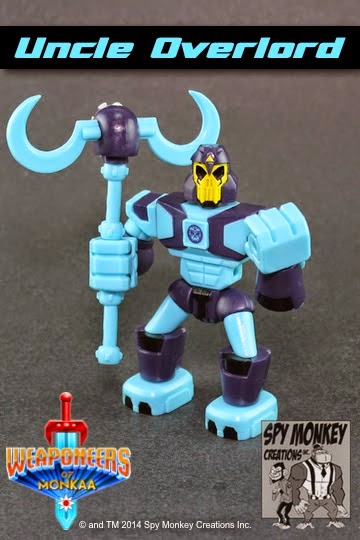 Spy Monkey Creations will be at DesignerCon is Pasadena, CA this weekend!  Click here for a look at their new figures, including Uncle Overlord (pictured) as well as Fake Barbarian.

The fake Skeletor is $20, as is the Faker. No word yet on when you can order them online, if you can.
Posted by Adam16bit at 6:30 PM No comments: 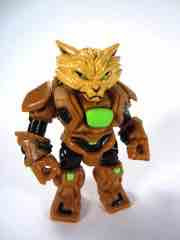 The Armorvor Rig Crew Mimic was the final painted wolf headed Armorvor, complete with orangey colored fur. He's not the first one to be close to that color, but he is in fact the last! I appreciate the finality, as the mold is starting to feel old if you're a long-time card-carrying member of the Glyos cult and I'm not sure if the line has fans who aren't more or less on board with buying new figures every few weeks.
[ READ THE FULL REVIEW ]
Posted by Adam16bit at 2:12 AM No comments: 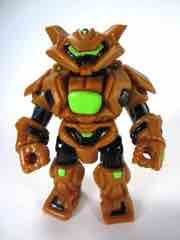 The Armorvor Rig Crew Mimic was the final painted wolf headed Armorvor, complete with orangey colored fur. He's not the first one to be close to that color, but he is in fact the last! I appreciate the finality, as the mold is starting to feel old if you're a long-time card-carrying member of the Glyos cult and I'm not sure if the line has fans who aren't more or less on board with buying new figures every few weeks.
[ READ THE FULL REVIEW ]