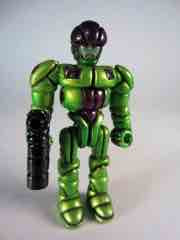 Welcome to day #600! Let's look at the Glyan Squad Verihex figure, which is an edition size of (I believe) five. In a series of back-and-forthings and trades, this nifty release found its way into my toy shelves and stands next to my other Glyos figures. The creator's blog is here if you want to read that. The creator has done numerous Glyos customs, including a matching Armodoc and several light-up pieces. Neat stuff. If you have the chance, grab one. Matt Doughty's Glyos line is unique in that it's super-limited and a big chunk of it is sacrificed to provide the canvas to the creativity of others, which is what makes some of these guys even more special. Something ceased to be so that this nifty figure could happen.
[ READ THE FULL REVIEW ] 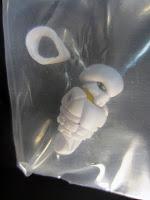 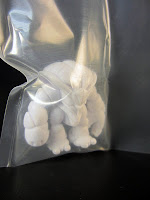 They're here!  The latest Onell Design Glyos drop sold out pretty quickly, and as luck would have it there were unique bonuses in the shipping boxes!  A White Pheyden Head, Torso, and Scarf were included in one baggie, while an all-white unpainted Crayboth was in another.  Great custom fodder on both accounts, hopefully the company will do another run of plain white Crayboth for those looking to do some DIY deco on these. 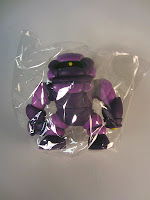 It's also worth noting that Syclowave is pretty awesome, and does not include an alternate classic Armodoc head.  The last issue had both Armodoc heads, so this Shockwave-inspired creation is a little different.

As far as I know, there were no other surprises... I'll be opening the bags over the coming day(s) and posting reviews as time permits!  Everything looks great, as always.
Posted by Adam16bit at 11:27 AM No comments:

Visit 16bit.com's Outer Space Men Toy Fair Coverage right now!  Why?  The Outer Space Women are being shown!  Ohpromatem (left), Horrorscope, and Astrodite made their debuts, featuring pieces from earlier figures and the upcoming Terra Firma, who you'll recall was at this event last year.

An entirely different kind of Wayne's World!  Mr. Wayne Barlowe was on hand at Toypocalypse 3 in Toy Tokyo's basement a few hours ago, and I took a monster gallery of the 5 new action figures.  Click here to see them at 16bit.com's ongoing Toy Fair 2013 coverage.
Posted by Adam16bit at 9:39 PM No comments: 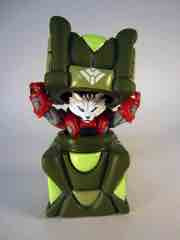 Part of the charm with Glyos is that it covers a lot of fannish bases, from little cartoons to minigames to customizable, construction pieces. The Task Force Volkriun Core Block is, on the surface, just a recolor of a block used to make other, larger creations but it was also shown in one of the animated shorts as a character unto itself, a snotty computer interacting with Glyans and other beings from the edge of space.
[ READ THE FULL REVIEW ]

22 new items were introduced for the Operation Sonesidar drop, and two and a half hours later 6 remain.  Several items were gone in the first 20 minutes, with the amazing Syclowave gone first and the Armorvor next to go.

Click here to see our archived menu from the drop, oh ye citizens of the future.

The green Neo Phase figures, the Block Rig, and a few upgrade sets remain available.  Click here to see what's left at the store.
Posted by Adam16bit at 9:03 PM 1 comment:

Glyos Drop: All Systems To Go! 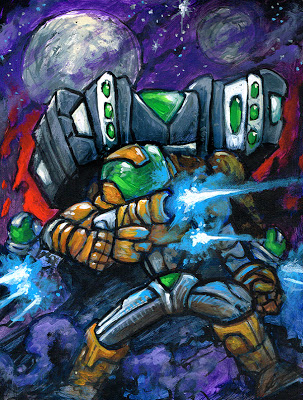 If you didn't already hit up the Onell Design Shop for take-out tonight, you already missed Syclowave.  He sold out in 5  minutes, with everything else still buyable as of I type this, but numbers are dwindling.

I'll be posting the full menu later for your future reference, and for your current reference I spent too much money.  But I needed an orange Armorvor plus little buddies. UPDATE: Armorvor, Sarvos sells out in about 15 minutes.
Posted by Adam16bit at 6:43 PM No comments: