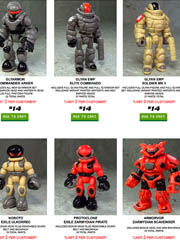 Click here to order what's still available - a lot has sold out, and the store had some snags. See what you can get!  As I write this, 8 out of 18 items remain in the store.
Posted by Adam16bit at 11:51 PM No comments: 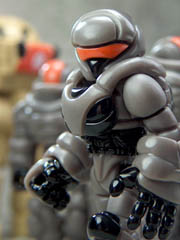 It's new!  Coming Thursday Friday at 9:30 PM Eastern -  Return to Esedeth!  Onell Design has a drop with... something.  You can see Robo Force and others in the picture, with more new things coming.  Probably.  We don't know.  Click here for the announcement.

Spy Monkey Creations has brought us some pretty cool weapons and the Weaponeers of Monkaa line, and their next new thing is Battle Tribes.  This was revealed on October Toys' Toy Break, and the above image was being forwarded around late Friday night.  (You can see some more of Toy Break via stills here.)

The line is expected to launch at noon Pacific on Friday, April 8.  Painted figures are $15, unpainted figures are $10.  Each figure includes one of each head, all of the armor and weapon bits, and that's not bad.  They appear to be similar in size to the great Rise of the Beasts line.

Click here for Spy Monkey Creations, which at press time does not have any information on this line.  Battle Tribes does not appear to have an active site on any of the domains I tested.
Posted by Adam16bit at 11:31 AM No comments: