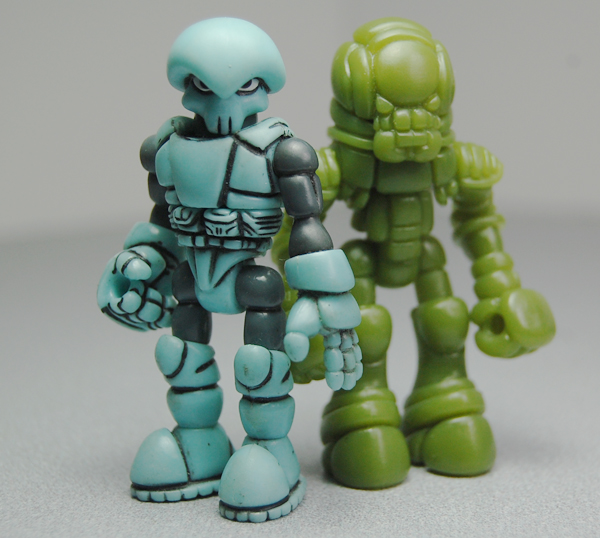 Meet the Outlander!  Nicholas Merz (of Ni Stuff) posted a preview of this figure complete with a breakdown of the parts and how they work.  Nicely done!  Be sure to check it out.

Also check out this post on the October Toys forums which shows the body with Ni Stuff's own Doctor Styre PVC production head, which is available right now for a paltry $2.
Posted by Adam16bit at 9:22 PM No comments:

After we saw drawings a few months ago, now NiStuff has shared a look at the upcoming Outlander figure.  It looks quite a bit different from the 2D line drawings, and definitely for the better. There's no release date yet, but Ni himself confirmed there should be two colorways when it launches on the October Toys forums.  (And he's taking questions, so go there and ask.)
Posted by Adam16bit at 1:05 AM No comments:

Creator Boris of  Banimon fame posted on the October Toys Forums to confirm he made a few changes to the Banimon figure mold - so you'll want to pick up at least one more on his next drop.  He says:

"So in a way of an update, the Banigoth/Red Army Men mold has received a little tweak over the past few weeks. In order to fix the neck pin issue on the Banigoth head, that pin has become a regular Glyos male/male switch pin. There is also a suble change on the backpack along those same lines, so this should add some additional building options to the toy overall. I should have some pics soon to share. So, the next drop (date to be announced) will already feature figures from the new and improved mold. "
Posted by Adam16bit at 10:37 AM No comments: 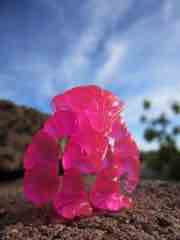 Not every figure is big, nor painted, nor impressive. Some are merely good. I've got dozens of these critters in various colors, but Crayboth Nuldireus will knock you on your butt due to the insane brightness of the pink. What's that you ask? "Didn't these guys just do a pink one?" Why yes, they did. A promo figure (read: free, not for sale) was given away with orders in May of 2012, with a paler, darker, and more glittery plastic. Neither is superior, both are good in different ways. However the Nuldireus flavor is bright, crazy bright, and looks fantastic in a slightly darker environment. In sunlight, it's just insane how it looks.
[ READ THE FULL REVIEW ] 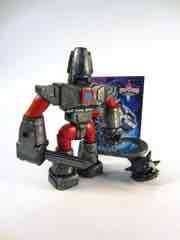 The Weaponeers of Monkaa line was well-received by the toy snob press, and at 5 1/2-inches tall the hefty Palidar is compatible with your many other Glyos toys. If you own a Pheyden or care about Crayboth, this alone makes buying a figure from this line necessary. They're interesting to fidget with, but of the many PVC releases in 2012 this is one that grew on me the least. I thought Palidar was the best-looking figure of the batch (and still do) but the design is a larger departure in terms of size and dimensions from the other Glyos-compatible toys and as such has to be taken on its own terms.
[ READ THE FULL REVIEW ] 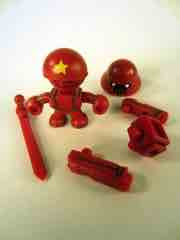 The Fire Eaters (Red Army Men) bring back the nifty design for another go-round, as one of three new colors in last December's launch. The 1.3-inch figures debuted in the fall with black and green figures, and followed-up with white, red, and silver in December. The first launch sold out in a few days, the second batch lasted a while. Why? I'm not sure. They're still good figures and the unique red plastic with the yellow, black, and/or white plastic on each piece is pretty impressive.
[ READ THE FULL REVIEW ] 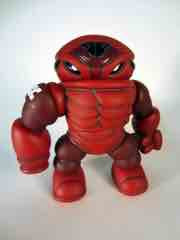 With a limit of 2 per customer, the Syclodoc Neutralizer sold out in about 4 minutes. This doesn't seem to be too abnormal, as any new pieces from Onell Design tend to fly off the digital shelves pretty dang fast. This one builds on the classic vinyl Armodoc and adds a new color with a new head sculpt, inspired at least a little bit by Gundam's Zaku. The Armodoc now comes with a default Syclodoc noggin, which has a big black eye with a white dot in the center.
[ READ THE FULL REVIEW ] 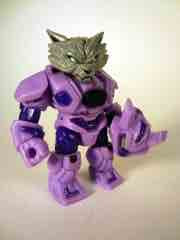 With a limit of 1 per customer, the Neo Nebula Armorvor sold out in minutes last year. These little buggers seem to be some of the most popular things Onell Design has cranked out, and with good cause: they're fun! 2012 was a big year for toys in the key of Battle Beasts with each having their own unique benefits. I like the Armorvors because they feel like a weird mix of 1980s toys and hyper-modern stuff. The decision to keep these with swivel joints gives them a retro feel you just don't get in the US toy market all that much.
[ READ THE FULL REVIEW ]