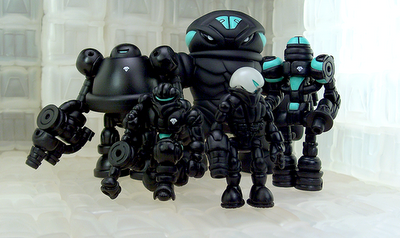 Apparently Onell Design invested in some PVC tooling this season because the swell Hades Force drop includes the first-ever PVC scarf!  And it's an oddly exciting little piece, Matt Doughty shows it off on his Hades Pheyden MK II and Buildman Jorvannic figures.  It looks good and two flavors of Armorvor are included.

The full details are here, (well, mostly full) and the long and short of it is to be ready Wednesday, September 5, at 9:30 Eastern.

This drop is mostly black plastic with some glow-in-the-dark, clear, and of course teal.  Transformers fans may be delighted by the similarity to some of the black-and-teal Nemesis Prime/Scourge figures... I sure am!
Posted by Adam16bit at 2:04 PM