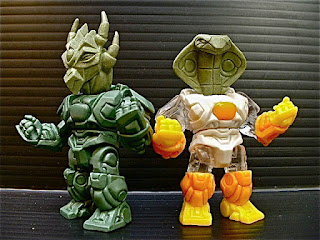 After the pretty swell Wyverillian, another multi-collaboration between The Godbeast, Onell Design, and Jason Frailey is the Cobrillius!  It's similar to a previously-seen snake design, but with that special house style you only get from Matt Doughty.

The stylized design unmistakably resembles one of the more feared reptiles on the planet Earth, while modifying the design to look like it would fit in the Glyos system and stylzing it so a customizer should be able to do some interesting things with it, were they so inclined. 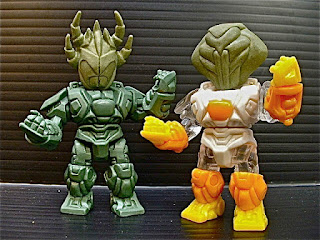 As always, you can pick up a casting of this head from The Godbeast via his October Toys thread to the tune of $15 a whack.

Also as always, there are no known plans to mass-produce any of these heads in PVC at this time.  But hey, who knows what the right bribe or financial incentive can do in the world of small-run toy production, right?
Posted by Adam16bit at 5:39 AM