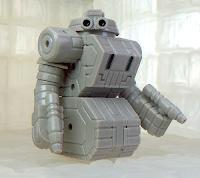 Did you order the new Robo Force Genesis Edition, an update of Maxx Steel of Robo Force fame? If so, congratulations!  If not, tough - it's gone!  It sold out by 9:03 PM, give or take a few seconds, in the Eastern time zone.  Fans of Mordles had ample time to get their figures, but this one - grey with black paint apps - sold out in a flash.  I ordered after hitting refresh a few times, and when I peeked at the inventory it was basically gone before I could blink.  People love this guy.

The figure is almost identical to the ones sold at New York Comic Con, except these have limited black paint applications.  It's subtle - you can see a few of them here.

This figure - which seems to be the Glyos figure to beat for 2013 - was designed by Matt Doughty of Onell Design/Glyos/this blog's Raison d'être fame.  You can see his notes here, in a blog post called Maxx Works, which indicate numerous influences and hidden builds ranging from Tomy's various toy lines including Zoids.

You'll also want to see John Doctor Kent's post The Return of Robo Force at the ToyFinity blog, explaining how the return came to be.  I need to go read this now myself, so if you'll excuse me.  I'm really excited to get my mitts on this one.