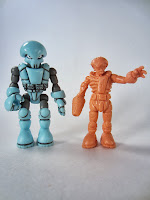 If you supported the OMFG Series 3 project on Kickstarter, you're probably going to get a box in the mail if you haven't already.  Supporters springing $25 or more got Zombie Pheyden, a new October Toys Mini-Figure Guy (OTMFG) which will most likely be available in every color in which OMFG Series 3 is sold.

Originally slated to be a part of October Toys' unfortunately shelved second series of Z.O.M.B.I.E. mini-figures, Pheyden was instead brought out as a bonus here.  He is not on sale individually yet, but odds are you'll see him show up in the October Toys store very soon.

For those wanting to see more about OMFG Series 3, stay tuned to 16bit.com for a review later this week.
Posted by Adam16bit at 2:13 PM