This year, the Four Horsemen have (at least) a few sets of exclusives.  Two White Star Outer Space Men sets have been revealed as this year's "Beta Phase," and you can read about those at the Outer Space Men News Blog.  6 all-white figures with blue highlights for about $70, or buy them individually. 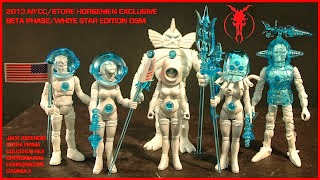 Also for sale, and confirmed at Source Horsemen, will be an unknown Power Lords item, also for sale at the Onell Design booth #102.  I don't know what it is - I would assume it's a recolor of Ggripptogg, but this is based on nothing.  It could be more Power Soldiers, which would be nice as those are great figures.  More as we have it!
Posted by Adam16bit at 5:23 PM