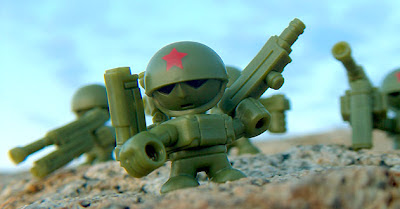 The Planet Banimon Blog has been updated with some more tidbits on the upcoming release of these new Glyos-compatible figures.

The REAL dirt can be found in the October Toys Forums where this was posted:
"So it's going to be two colorways total, the green you see here (exact match with the Task Force Volkriun green), plus the previously announced Apocalypse colorway. Each figure will be sold separately and have both heads and all the weapons included, so basically the contents of the entire mold. Exact launch date and details to follow....."

Is it time to start getting excited?  I do believe it is.  Each figure has guns, swords, and a Darth Vader-esque alternate head, so what's not to love?
Posted by Adam16bit at 4:44 PM