Good news: the sale started without a hitch! The bad news: the new Rig, the gold Axis joints, and the fancier versions of the two gold figures are already gone! Update: Xodiac's gone too! Before you go any further, just go to the store and make sure you got what you wanted. After you're done with that... 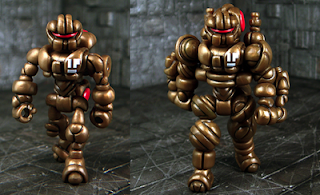 This posting has the details of the new stuff, including a few details on the new releases which are up (and in some cases, sold out already.) Here's the real doozy of a quote:

"Speaking of the Rig, something kind of insane is in development for what we hope is an October release. If you like vintage Transformers then you might like what we have on deck. "

Update: Also, another late-night post has a ton of concept art, including what seem to be a new figure type and some interesting (possibly water-based) alien creatures. If you're the kind of person I am, be sure to open Photoshop and whip out that "Dodge" tool. 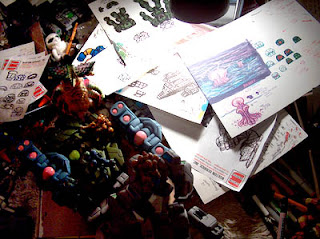 Update #2: This turned out to be the first reveal of the Armorvor!  For those keeping track, the little guy was first "shown" here, first revealed in three dimensions at New York Comic Con 2011, and was first sold in July 2012.