That didn't take too long! As described last night, Battlegrip.com has the scoop on the new Rig. It's a remolded item with new wings which double as guns, and Phil from the site is the inspiration for the piece. 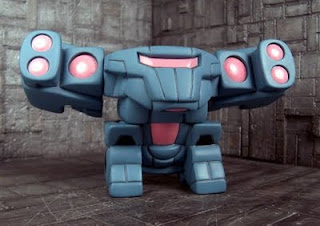 He writes: "The origins of this new part stretch way back to June of 2010 when I visited Matt and had a chance to handle the original Rig master.[...] During that evening with Matt we chatted about how just swapping out the arms for wings would drastically change the look of the toy. Little did I realize at the time that Matt would latch onto that small snippet of our evening and create something truly amazing."

It's worth noting that this piece looks cool, is due later in August, and sports a tampo similar to a symbol on the new Glyans and Glyaxian Xodiac.

UPDATE: Now there's a post at the Glyos Transmission Web Log with more intel. Do read it!

UPDATE #2: Over the weekend of August 20, Battlegrip.net posted an additional show showing off the giant tampo symbol on the side. I'll say it again: I want this logo on a t-shirt. (Adult Medium, if you're taking notes.)
Posted by Adam16bit at 10:57 AM