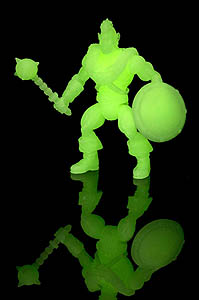 Remember when it used to feel like Glyos would go and not do much for months at a time?  Well, that's over.

On Spy Monkey Creations' Facebook we see plans for another Battle Tribes drop - a very good one - set to hit online shelves in 7-10 days.  Glow figures, a figure that looks vaguely like Prince, and some very nice He-Man-ish paint jobs.  It's worth checking out.

A ton - ton - of pictures of the new figures and alternate heads may be scoped out on their Instagram.
Posted by Adam16bit at 8:23 PM