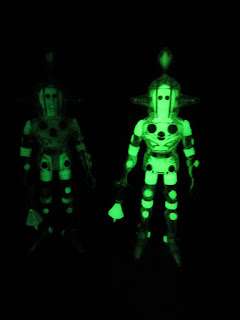 The Star Trek Mission New York exclusive Cosmic Radiation Gamma-X will go on sale at 9:00 PM Eastern on Friday, September 9.   It's $25.00 at the show right now, and presumably on TheOuterSpaceMen.com as well.

It's a lot brighter than the original figure - as you can see, the one on the left (2014) was exposed to the same black light as the one on the right (2016).   Being cast in glow plastic makes all the difference, so if you're one of those people who specializes in glow Glyos you might want to set a timer for this one.
Posted by Adam16bit at 5:53 PM