If you weren't online and ready to buy, you may have missed out.  This batch of Armorvors lasted about 12 minutes, with the purple Neo Nebula Pheyden selling out first and all three Armorvors going next.  Verexxan Armorvor (grey) sold first, followed quickly by Neo Nebula Armorvor, with Spectre Armorvor taking a few more minutes. 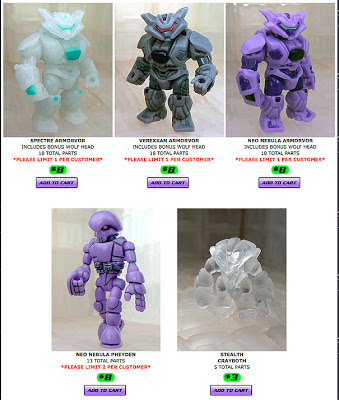 With only 5 total figures, it was a pretty small drop and an easy one to buy in its entirety.  (If you were early, of course.)  The Armorvors had a limit of 1 per figure with Pheyden at 2 per figure.

Stealth Crayboth is still in stock at press time.

This was not a record sell-through, as some have asked: the last batch (clear and black) took about 8 minutes and the first figure took several times that.
Posted by Adam16bit at 11:29 PM