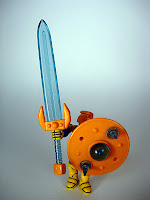 This is not the review-- that comes next week. Spy Monkey Creations will be releasing Spy Monkey Armory Series 1 next week, which is basically to weapons what Xevoz was to action figures. The sturdy-enough-for-collectors weapon set includes parts to make roughly 5 weapons which can split apart at several places through the increasingly popular (and soon to be ubiquitous) Glyos plugs. Pictures to the left is a Glyan trying to hold on to the Master Blade and a War Shield, both from the Doppelganger version of the weapons. They're cast in 5 different color schemes. 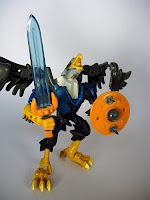 A full review is coming next week, but I was so taken with the set I had to share early. Check out Xevoz Storm Wing holding the same weapons-- for any large-ish (let's say 5-inches or taller) figure line, these weapons are just the right size. They're seemingly crafted for the likes of Masters of the Universe Classics, but there are lots of unique pegs and pieces that should be specific to Glyos customizers.

In short: these go on sale next week, and for $20 I believe you'll get your money's worth... if you have a lot of action figures. If you only collect Glyos and Outer Space Men, these will be fun, but not fantastic. If you also collect other figure lines, you're in for a treat. Anyway, come back next week for more. 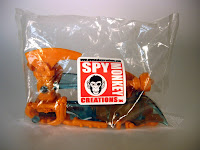