The Onell Design crew are in Japan and apparently, they've been pretty busy. 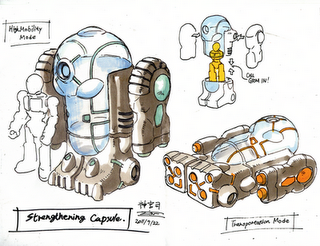 From the blog: "The most shocking element of the night though, was when [Yasuhiro Nightow] whipped out an original sketch done by [Noriyuki Jinguji] that nearly made me and Jesse's heads explode. According to Nightow, Jinguji had become interested in the Rig that I had given him last September, and after analyzing it for a while, decided that Callgrim should have a Rig type vehicle as well. So he designed one."

Wow! The designer worked on Trigun, Gungrave, and other properties so that's actually super-cool on a variety of levels. Be sure to read their post!
Posted by Adam16bit at 8:03 AM

Email ThisBlogThis!Share to TwitterShare to FacebookShare to Pinterest
Labels: Callgrim, Concepts (No Known Plans for Release)