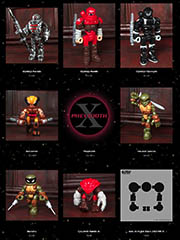 Wave 77! What is assumed to be a Kenner Snaggletooth Pheyden joins more ninjas Marvelous and Teenaged Mutant. This is another fantastic drop and a lot of it - but not all of it - can still be bought. Click here to see the November 29 2018 Onell Design drop menu. 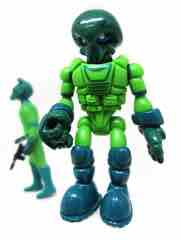 After a wonderful run of Adventure People tributes, Onell Design turns to a galaxy far, far away with Greeden. Based on a very specific style of figure from Kenner, their 1979 off-model Cantina aliens were official products with the kind of authenticity usually reserved for bootlegs. Thanks to a lack of good scrap and apparently lax approvals, we got a figure with a good approximation of the mask - but a costume that seems out of a daily sci-fi newspaper strip. Never being one to miss a good tribute, Onell Design ran with Greedo's look and applied it to Pheyden.
[ READ THE FULL REVIEW ] 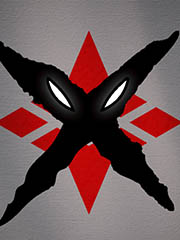 Onell Design confirmed in a post Crush the Clan that a new drop is coming this week! Including items from D-Con and possibly new things, set your clocks for 9:30 PM EST for the fun on Thursday November 29.  Click here for comments and hints.

A Deadpool-themed Callgrim, a new TMNG-themed Noboto, and a Quallerran that looked like Wolverine were sold at D-Con. Will they be here? I hope so!

Also I will sadly not be here for the drop, so if anyone can grab menu pictures please write me and I would greatly appreciate it!
Posted by Adam16bit at 8:41 PM No comments: 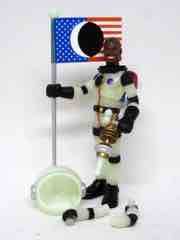 I was expecting a glow-in-the-dark version of Jack Asteroid - which we got - but to get a new character like Zero Gravity too? I'm surprised. He costs more than the original Jack Asteroid figure and has less paint, but the dude friggin' glows. The fully Glyos-compatible astronaut has alternate bent/straight arms and can be taken apart at nearly every point of articulation, and then some. That little moon ingot pops off, the helmet dismantles to 3 pieces, and the figure has an ab and a belt joint. The mold should look familiar - it was first released as the glow-in-the-dark Alpha Phase Metamorpho in 2010, and was subsequently released as multiple Metamorpho and Jack Asteroid bodies, most of which was reused for other figures in the first couple years of the line. It's the perfect generic humanoid template, they could keep more heads coming and I'd probably buy even more redeco figures.
[ READ THE FULL REVIEW ] 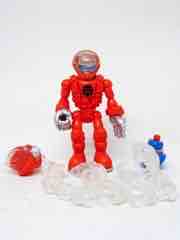 Some of these are really clever. The Glyceptor references Fisher-Price's Adventure People Alpha Interceptor pilot, a blue-capped human inside an orange space suit with silver gloves and some distinctive markings - which this deftly references. The clear Sarvos helmet has a lot of color on and under it, giving it a magical otherworldly quality that does a good job of selling the idea that this might be from some weird part of space.
[ READ THE FULL REVIEW ]

Q&A with Jesse DeStasio - Action Figure of the Month Club 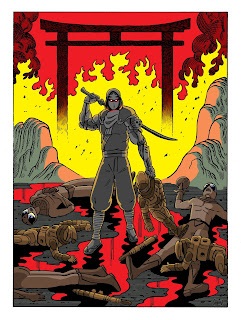 Jesse DeStasio of Toy Pizza fame reached out and asked if we want to do a Q&A about his new Kickstarter, Action Figure of the Month Club.  Of course we scraped up some questions from some conversations we were having with friends about the topic, and dumped those here for you.  Thanks for answering, Jesse!

He was also kind enough to share an original illustration of the Device Ninja Poster artwork, so enjoy!

Click here to see the Kickstarter with 15 days to go.

1. How will Action Figure of the Month affect your semi-regular surprise Toy Pizza drops?  Will those still continue? - Glyos News Dump
We will still have drops in the store throughout 2019, but they will be smaller in nature. Also, instead of All-Ins once or twice a year, the focus will be smaller boxsets that tell a specific story (the recent LA Knights set is a good example).  -Jesse DeStasio

2. Will any of the figures be available in Toy Pizza drops after they go out to club members? - GND
Yes, pending availability. It's a bit of a moving target at the moment, but the intent is any surplus will be on the store sometime long after the AFTOM club has been fulfilled.   -JD

3. Do you plan to reserve anything specifically for the club - for example, glow in the dark, or metallic paint, or some other feature? - GND
Yes to all of those. Ultimately it will be depend on how many backers we get, but I'd love to see really cool styles go out to club members.
-JD
4. Will the club be 100% Toy Pizza characters and IP, or might there be guest appearances from other members of the Glyos family? - GND
I would say it'll be 90%-99% Toy Pizza related. There are a couple of interesting opportunities that have presented themselves, but nothing is solidified yet. I also did some polling and overwhelmingly our customers wanted to keep it just KOTS. But....if I saw an opportunity to collaborate that was too good to pass up, I would take it.   -JD

5. Do you have any plans for some sort of ridable thing - a vehicle, a creature with a saddle - for your toy line? - GND
Sadly, no. No vehicles, no beasts of burden. The days of those anniclary items being affordable are long gone. As much as I would love to have something like that, the tooling burden is too great and your customer base is much smaller. Sad.  -JD

6. Do you expect to have newly tooled parts or entirely new figures in every month's drop? - GND
Depends on how much we raise. Right now I think at least 1/3 to half of the months could end up being new parts or entirely new figures. The nature of planning something with so little runway means we'll be relying on our existing tools to get the first few months done. But the good news is "existing tools" includes two very big projects no one has seen yet. So even in those cases, there will be some newness.   -JD

7. The Glyos-compatible community is tightly knit, but sort of hard to follow all the goings-on.  Is there any chance you might include call-outs to other compatible figures in the boxes as well? - GND
It's an interesting idea, but we don't have boxes (just pvc bags) and there isn't much opportunity for cross-selling. In that polling I mentioned early, I was surprised that the feedback from customers was they want a more pure-KOTS experience. I admit KOTS is a bit of an anomaly as far as other Glyos lines go...there is a much more metered cross-over with core Glyos.   -JD

8. Is there a core action figure-adjacent kind of toy you want to do but haven't done yet?  A playset, figure stands, or other distinctive display or storage items? - GND
I'd love to do it all! I have designs for a couple mechs that would be financial suicide. I think at the end of the day we are a figure company and for the immediate future we have to keep growing that business.   -JD

9. There have been a number of Kickstarters and other projects making brand-new NES and GameBoy games lately - from ROMs to actual full manufacture of a cartridge.  When do we get the Knights of the Slice 8-bit extravaganza? - GND
Ha! I dream about this all the time. Drew Wise, who's probably the best pixel artist out there, and I have discussed a Snatcher-style RPG done the old school way. Like an interactive narrative. The problem with ideas like this is- it's very difficult to take myself off the actual production of the figures to do other things. At this moment we have 4 different products in different stages of the production cycle amongst three different factories. If I skip even a day of answering emails, the wheels come off the cart.   -JD

10. With sporadic releases from Hasbro and Mattel, it's entirely possible your Action Figure of the Month project may be the only 3 3/4-inch action figure being released during several months in 2019.  Do you plan on doing anything special to reach out to fans of the size that maybe haven't taken the plunge on an indie figure or a Glyos figure yet?-  GND
Absolutely. In many ways this campaign is tailored more towards new fans than current fans. I wanted to create a great jumping on point for people who might be new to the hobby or have been on the fence about Glyos or KOTS. My hope is, by tapping into the idea of the mail-away surprise figures we all got as kids, there would be a universally happy memory people would embrace. So far, the theory's proven true.   -JD

11. To date, your figures have primarily arrived bagged.  Will we ever see special carded or boxed editions of your Glyos-compatible characters?  Perhaps little white boxes with bags that say "Toy Pizza" on them? - GND
I have started doing our first carded figures within the past few weeks, with a official launch of them at DCON later this month. It took a long time to find the right printing house and the right approach. Each carded figure will be hand deco'd or have resin pieces and the cardbacks will be hand drawn.   -JD

For the club, the packaging is super-super important to me. I've budgeted a quarter of the entire cost to solely go to how these will arrive. While the plain white mailer is appealing to me and you, we do have a lot of younger customer that that would be lost on.

But yes, I'm zeroing in on what our presentation will be and it's one of the most crucial elements of what will eventually arrive in your mailbox.   -JD

12. Will all of the figures in the subscription program be Glyos-compatible? - GND
Again, with a couple opportunities on the horizon it's tough to say. But I would say i'm 90% certain every month will be Glyos-compatible.
For me to break the streak of having each month work with the other, it would have to be such a tremendous bonus.   -JD
Posted by Adam16bit at 8:29 PM No comments: