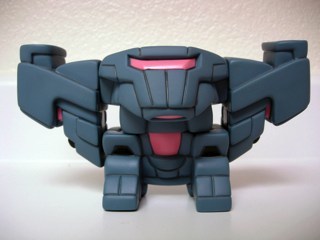 See this? You can't have one. I know that's obnoxious but the huge popularity of the Heavy Armored Rig Relgost Wing Divison caused it to sell out in about an hour and change. The exact run is unknown, presumed to be in the hundreds, and went so fast that apparently there weren't even enough for eBay-- at press time, none have appeared on the auction site. Previous versions of the Rig were made in new colors and rereleased, so while it's likely a Wing Rig could be in your future, this Wing Rig will not be one of them. It's so oddly neat-- the design and coloring feel like something out of a late-1980s Japanese toy and hobby magazine, the kind of thing you just can't find in a store these days.
[ READ THE FULL REVIEW ]
Posted by Adam16bit at 3:36 PM