New!   Healey Made and Battle Tribes shops will be getting updated with new toys this week.

The Healey Made Instagram confirmed a drop would be on Monday, April 20 but not what or when.  His previous figure is the Commander Raider, and if it's still in stock Monday I may order one.  I have the Shadow Raider and it's a gem. 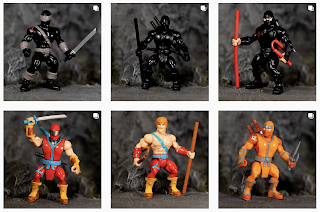 Far less of a mystery is the Chuck Norris and Ninja-influenced Battle Tribes drop.   3 new figures with tons of gear and heads go up at 6:00 PM Pacific on 4/22.  Some older figures are still available.
Posted by Adam16bit at 11:34 PM