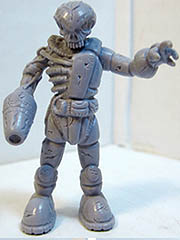 There really is no stopping Pheyden! If you pledge $25 or more on the OMFG Kickstarter, a Bonus Z.O.M.B.I.E. Pheyden Mini Figure will be included. So if you kick in $25, you get a flesh OMFG set, a black OMFG set, a black Pheyden, and a flesh Pheyden.  Basically, you get one Pheyden for every OMFG Series 3 set you Kickstart.  If that's the verb.

Zombie Pheyden was originally shown as part of Z.O.M.B.I.E. series 2 at Comic-Con last year in San Diego. According to the October Toys forums it seems unlikely the remaining figures will see production. To see Pheyden and the rest of series 2, click here.
Posted by Adam16bit at 5:54 PM