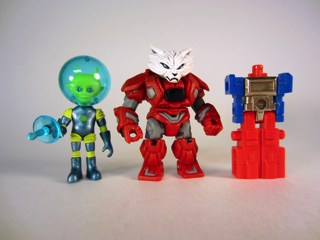 This is in my top 5 of the year... no question about it. It's one of those figures which, had there been no limit, I'd probably have bought about 15 of them to send people come Christmas season as I'm fairly sure most of the people I know do not have one.

If Matt Doughty of Onell Design was a friend (or at least associate) of yours, you may have seen sketches or sculpts for the Venjorun Armorvor over the last couple of years-- he's had it on his phone, he's teased it on his blog, and he even let us preview it late last year. Since it's been at least a couple of years since I first saw it, I'm not only delighted that it finally made it out, but that it did so cheaply. $8.00? For a low-run figure withabout 14 points of articulation, I'm not complaining. It even has an alternate head-- the only thing it doesn't have is, sadly, a weapon. (Oddly, most of the figures from Onell Design come unarmed... or maybe that speaks volumes about our toys, culturally speaking.) Against the current mini-beast figure revival lines, this seems to be the largest at a hair over 2 1/2-inches tall. If Glyos figures like Pheyden were tributes to toys of the late 1970s and early 1980s, the Armorvor has to be late 1980s and early 1990s with its sharp lines, several V-like structures in the heads, and of course, the Black Core on its chest.
[ READ THE FULL REVIEW ]
Posted by Adam16bit at 12:19 AM