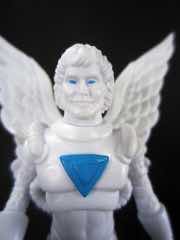 Believe it or not, I expected the look at White Star Commander Comet to be the obituary for this line - maybe I've said that before a few times. By the end of 2013 and 2014, fan sentiment toward the Four Horsemen's two Glyos properties seemed to straddle the fence between adoration and loathing. On one hand, Power Lords and The Outer Space Men were amazingly well-crafted indie toys using familiar licenses to make something for the discriminating action figure fan. On the other, to recoup the tooling investment fans were effectively used to subsidize the tooling with varied, dull unpainted figures like this one. Effectively a blank that didn't have the good sense to actually be unpainted, this figure was part of a set that actually cost more than the fully-painted figures while delivering less. Even more unfortunate, the set continued - 14 of the (so far) 17 unique characters were done up in bare white plastic. And, if you can believe it, the set is going to be finished up very very soon, and at least those three have more interesting designs that make more of the whole White Star motif.
[ READ THE FULL REVIEW ]
Posted by Adam16bit at 1:30 AM