As you no doubt have read, SSM Vending has been distributing the new Onell Design Bit Figs, Glyos compatible figures roughly the same size as Mordles or Hasbro's Fighter Pods/Spider Pods toys.  They're about an inch each, and make excellent puppets. 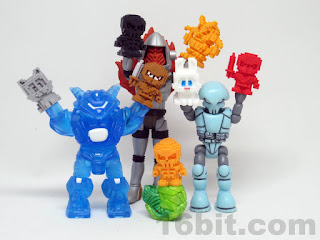 Each figure comes in a capsule and will probably be either 25 or 50 cents at a machine near you.  SSM distributes to all sorts of places, and I've seen their machines at grocery stores and (unless I'm mistaken) Toys R Us stores.  I don't know if it's regional or a chain-wide deal, so I would suggest checking your local machines for the SSM branding - it should be on the graphical insert cards.  If you see it, that means you've got a good chance of possibly finding these.

Each set includes 5 sculpts in painted and unpainted varieties - and there are some color variants.

There are two series - Ninja and Animal.  I picked up a big bag of each since the distributor was within driving distance.  Here are some comments.

Animal Series
My bag did not include a complete set - I got Pup, Bun, Duck, and Pig in painted and unpainted varieties.  My bag had unpainted Kit, but not painted Kits - rather, it had Pup in Kit colors!  What did you get in yours?

Ninja Series
My bag did not include a complete set here, either.  It appears there may be as many as 50 varieties - 5 sculpts in 5 colors, each painted or unpainted.   In my bag, Ku the Skeleton seems to be the most common sculpt, with the orange color dominating the bag.

Overall
They're small and cute, and not as rubbery as other similarly sized figures.  They fit perfectly on Glyos figure pegs by design, and make adorable puppets or peg legs.  I'd suggest dropping a buck in a vending machine if you find them.  If you order them by mail, be sure to ask for a header card with figures - each has 5 painted figures, and you'll want those.

These are notable in that they are - as far as I can tell - the first Glyos/Onell Design figures to get national distribution at big stores.   The vending machines keep the prices low, and it cracks open the door for more neat ideas.  Just a few years ago we were talking about the democratization of designer figures through a lower-price OMFG line, and now Onell Design has discovered that you can give the things away.   Collecting them all, on the other hand, may prove tricky.

I like 'em.  I don't know if I'll buy series after series of new colorways, but if we get some glow I'll buy more of these.   Heck, if you get extras it's not like Halloween isn't around the corner.  Kids still like toys, right?
Posted by Adam16bit at 6:32 PM