My Power-Con exclusive Power Lords Power Soldier and Elite Power Soldier showed up in the FedEx today just after lunch, meaning I finally got to find out just why nobody was posting pictures of Onell Design or Outer Space Men figure parts swapped in with these new sci-fi marvels. 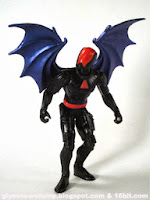 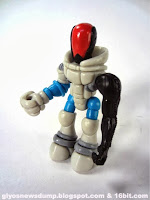 The good news is that the Power Lords from the Four Horsemen use the Glyos system, but with a twist.  Many of the parts - like the shoulders and head - use the traditional full-size Glyos plug.  The elbows, wrists, and ankles use a smaller Glyos plug as seen in The Outer Space Men hands and feet for Alpha 7 and Gemini.  Due to some peg gender-bending, you can't put the OSM hands on the Power Lords wrists - plugs plus plugs and holes plus holes won't work here.  The same is true of the feet - you may only swap those between Power Soldiers.

The figures are 3 3/4-inch scale, more or less, putting them right at home with your Outer Space Men and Star Wars action figures.  On a shelf, these are probably more likely to go with non-Glyos figures due to the realism of sculpts and the fact that while some of the parts swap nicely, others don't. 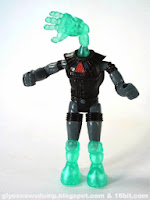 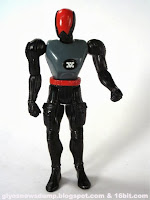 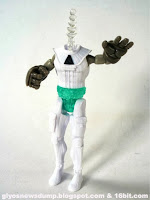 Getting the existing Glyos parts into a Power Soldier torso is tricky - the hole is recessed deeply in the shoulders, and the Power Soldier ball shoulders look positively wonky on an Outer Space Men torso.   The legs can sort of be swapped onto the Onell hips, but they don't really work on the OSM.   Heads from other figures don't fit easily in the Power Lords socket other than the Banimon offerings, but you can get some long, narrow pieces to fit in there as you see an arm and a ray gun in the above pictures.

I've only had these for a short while, and a longer review with impressions will be posted to 16bit.com on Wednesday.   In the meantime, enjoy the pictures and let me know what you're coming up with!
Posted by Adam16bit at 9:15 PM